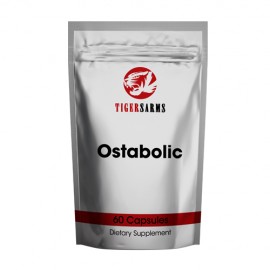 Due to the difficulty of researching with liquids, dosing/crystalization and user feedback.  We have decided to switch to capsule based SARMS.

Ostabolic-Ostarine (MK-2866) is a selective androgen receptor modulator (SARM) for the treatment of muscle wasting and osteoporosis.  The chemical structure of ostabolic has never been disclosed, but it has commonly been confused with S-4/Andarine because of similar results during trials.  However, those that take a look at patent databases will be able to see the differences between ostarine and andarine in terms of atom connectivity, where mk-2866 replaces both the nitro and acetamido moieties on the phenyl rings.

Mode of Action
Ostabolic works by binding selectively to the androgen receptor, causing bone and muscular anabolic activity.  This causes an increase in protein synthesis and helps build muscle mass while preventing wasting.  In addition to that, studies have shown that ostarine reduces recovery time from exercise and decreases injuries.

Studies
As of today, there have been almost a dozen scientific trials and studies involving almost 1000 subjects.

For instance, a phase 2A study with ostarine done on elderly individuals gave promising results after only 86 days of using the drug.  Both men and women were able to climb stairs better and had a significant  improvement in muscle mass while decreasing body fat.  What's more, men did not show negative effects to their prostate, and women did not have virilization symptoms such as growth in body hair.  Both sexes had improvements in cholesterol levels as well.

*This article is intended for educational / informational purposes only. THIS PRODUCT IS INTENDED AS A RESEARCH CHEMICAL ONLY. This designation allows the use of research chemicals strictly for in vitro testing and laboratory experimentation only.

Note: HTML is not translated!